APIDays LIVE London is over and we’re still buzzing with energy. This edition was special.

Partly due to the singular moment we are all living, but also thanks to the organisers, speakers and attendees who made this event one of a kind.

Through exhilarating technical issues preventing speakers from hearing each other, and funky virtual networking sessions, the event unfolded perfectly and 90+ experts took the stage to share their valuable experience and advice with over 1,600 participants.

Keep reading to hear more about:

Simon Torrance introduced the underlying theme of the event on Tuesday morning.

When a customer uses a ride-sharing app to pay for their ride, they are already using embedded banking. Through Embedded Finance, retailers can use the Buy Now Pay Later (BNPL) lending model to give their customers products on credit.

Another example is WeChat, the Chinese Super App whose features allow users to scan a QR code to pay for a product or service automatically. But more on WeChat and Super Apps below.

We may be tired of hearing this repeatedly, but we live in a world where we have everything at our fingertips.

Want a book? Order it on Amazon and get it the next day. Itching to watch a film? Netflix’s Recommender System can spoon-feed you compatible films or you browse nearly 4000 of them when you want, where you want. On your TV at home, on your laptop in bed, on the phone or tablet while you travel – anywhere.

It’s time for these capabilities to move to finance.

The global financial data-sharing movement is paving the way for such models and enabling finance to become invisible and embedded: Frictionless.

The result of this new approach is that:

Open APIs merely cleared the roadblock towards embedded finance, financial institutions and their ecosystems have to do the rest.

“The beauty of digital ecosystems is that they bring you to new market segments that you can’t or aren’t economic to reach by yourself.” – Paul Rohan

Another hot topic was developer marketing and developer ecosystems. In all truth, this theme persisted throughout the entire APIDays series.

As Paul Rohan stated in his talk on differentiating developer programmes, Developer Marketing is a very new discipline for incumbents.

Financial institutions are asking themselves how to: 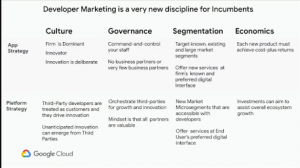 Then Rohan continued to say, just as Lars Markull mentioned in the talk with Luca Borella, that “the beauty of digital ecosystems is that they bring you to new market segments that you can’t or aren’t economic to reach by yourself”.

An API ecosystem does grant access to entirely new and untapped markets, but it doesn’t come without its challenges.

During the roundtable Inserting a new Developer marketing process into an existing marketing mix of an enterprise, the MC Claire Barret tackled the topic of trying to bring in new strategies into mature organisations.

Brent McLean, Director and Head of Open Banking at Credit Suisse Universal Bank, claimed that the important thing is to remember what is in it for you. For financial institutions, that means how do you productise it and make profits.

Once the potential is clear to the organisation, it’s a matter of helping leaders understand that this new technology gives them the opportunity to expand their offering beyond the impenetrable walls that stand tall around the finance sector.

Then, we got the Nationwide perspective. Brad Hohenbrink, who is the Manager, IT App Development for Emerging Partnerships, shared how the hardest part was getting the organisation into the Open Banking mindset.

But these are the kind of opportunities that only come about from new partnerships. And the tradeoffs, i.e. changing the culture and overhauling technology, are minimal compared to the benefits.

What do developers look for in an API?

But what exactly do developers look for as they “scan the API economy”? What do they look for in their APIs?

They look for developer-friendly APIs that:

Rohan shared that companies whose dominant business model is ecosystem driven experienced revenue growth and profit margins approximately 27% and 20% higher respectively than average in their industries.

We later added to the topic of developer ecosystems in our virtual booth. 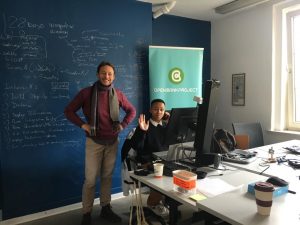 We presented the findings of our latest report on developer ecosystems and developer experience.

This summer, leveraging TESOBE’s experience and the results of a survey conducted with our ecosystem, we put together a report on how to retain developers and what they need to produce great results. 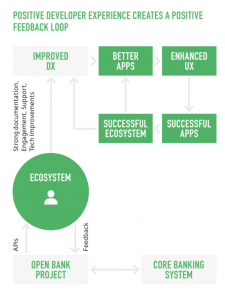 Positive developer experience creates a feedback loop that makes the ecosystem sustainable and successful. There are numerous improvements that can be made and, though they may seem small and insignificant, they can make or break the success of an ecosystem.

For more details on delivering the best developer experience, you can get your free copy of our latest report.

Super Apps are applications that expand their original offering to include a notable amount of often unrelated services. For example, as mentioned above, WeChat offers a unique payment method. But more than that, WeChat does EVERYTHING.

In addition to sending messages, calling, sharing location and adding contacts through QR codes, it offers:

Guerra noted that, as a fintech embedded in a super app, you can offer a lot more value:

Rappi, originally a courier service, is penetrating areas such as e-payments, scooter sharing, and financial services, so it’s quickly growing into a Super App itself.

Around the world, Super Apps are gaining territory:

Considering the speed of growth, we won’t have to wait too long to see the results!

Luca Borella from TESOBE explored the evolution of Open Banking and Open Finance in emerging markets with his panel of experts:

Eroglu shared that more than 50% of regulators in the markets he works with are thinking about some kind of open banking framework. They are at the beginning of the journey towards Open Banking / Open Finance. 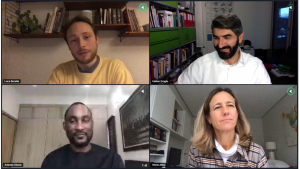 Aliño told viewers about the situation in LATAM, where only two countries are officially taking steps towards Open Finance: Brazil & Mexico. She highlighted the importance of being proactive and starting the journey even if there is no regulation.

The expert from IFC then underlined a key issue: “Banks that are international and have branches in the EU are better prepared for Open Banking and to expose their APIs because they know what they’re talking about and have the resources.”

But the local banks don’t have this experience and lack those resources.

However, as Eroglu then pointed out, mid-sized banks are in a comfortable position as they don’t run the risk of losing their customer base. They have less to worry about than the larger incumbents.

They aren’t threatened by regulation, so can immediately focus on the business value of Open Finance. It’s a whole new revenue stream for them.

“They are small enough to not be threatened by cannibalisation, but on the other hand not too small to not play a role in the field.” – Hakan Eroglu

Olowe had another take on Open Banking and regulation.

“It starts with anger, with people saying: “No, we shouldn’t go down this road.” Suddenly, it becomes a global business model. Soon, it’s going to be impossible to do banking and finance without APIs.”

And it seems to be true, at least for Open Finance. The global movement is no longer just a checkbox exercise and instead presents new opportunities that were previously unavailable.

Whether it be regulated or market-driven, Open Banking and Open Finance are unlocking unprecedented possibilities.

So where are we now? Well, Simon Redfern gives us a glimpse of what’s to come in his talk on using APIs to become embedded in the future mesh of commerce.

He commented on one of the aspects of Open Banking that has been slower-moving compared to the responsiveness of regulators around the world.

“An original part of OBP is financial transparency, I’d like to see some more of that. Especially when it comes to Government spending and what they do with taxpayer money etc…”

“I guess it was part of the master plan, now institutions have the tools that before were missing to become transparent.”

So now, it’s all about leveraging these new tools and forming lasting partnerships to build a more inclusive, transparent and frictionless financial services ecosystem.

Hopefully, we’ll be able to meet in person next year and not just through a screen… maybe in Hawaii! (That’s what the poll said, anyway.) 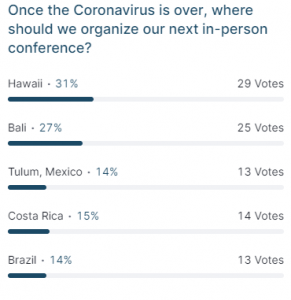 “APIs are the paranoid technology of the world.”

“Incumbent bankers are starting to realise that this is not a zero-sum game.”

“Lesson: Making it real with success stories and metrics.”

“Do APIs make it easier to hack the humans rather than hack the machines?”

“Mid-sized banks are small enough not to see the threat of cannibalisation, but on the other hand not too small not to play a role in that field.”

“It starts with anger, with people saying: “No, we shouldn’t go down this road.” Suddenly, it becomes a global business model.”

“In the future, we might have Coca-cola bottles consuming APIs”

“If we can embed APIs in music and literally everywhere, why not have them in finance too?” 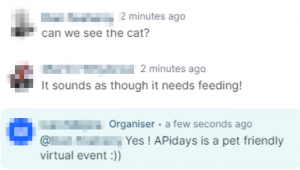